The comic began on September 11, 2013, and the first six episodes were published in the U-2 league of Shogakukan's Ura Sunday, which shut down at the end of 2014. It restarted on April 13, 2015, on Pixiv, where episode 7 was published with translations to English, Simplified Chinese and Traditional Chinese. Episode 7 of “Sushi Kokuu Hen” has the same content as episode 6 of another pixiv comic, “さいはて -Daydream Attractor-”.[3]

The story begins with the explanation of Graham's number. The title of the comic is "Sushi", and the readers expected to read story about sushi, but the first story was unexpectedly all about math.[5] As the story goes on, more advanced topics of googology, such as Fish numbers and chained arrow notation are presented.

Oyakata (boss)
Boss of Sushi bar.
Masimo
Sushi chef. His father disappeared when he was a child, and he lived with Oyakata since then.
Uruka Boufura
Ghost of a daughter of Oyakata.
Masa
Oyakata mentioned only once in the first story, and detail is not known.
Fish
Creator of Fish number.
Tunas
They operate the Sushi bar while Oyakata and Mashimo are absent.
Menoji
Wrestler. His ring name is "Menka seihin Astral kimochi goran kudasai kamen" (Cotton-made Astral look at my heart mask)
Jinkaku ichiro
Wrestler.
Tonikaku man (Anyway man)
Well, anyway!
Tonikaku lady (Anyway lady)
Huh? anyway!
Last Boss police
Police. Special guest invited from another cartoon.[6]

Googological concepts in each story 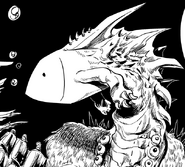 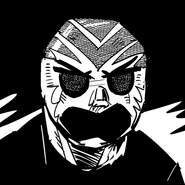 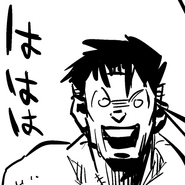 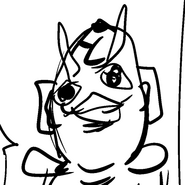 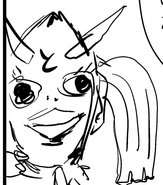 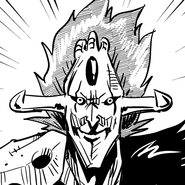 Last boss police
Add a photo to this gallery

Retrieved from "https://googology.wikia.org/wiki/Sushi_Kokuu_Hen?oldid=248120"
Community content is available under CC-BY-SA unless otherwise noted.