The rest of this page will describe how expressions in Y sequence are expanded.

To expand sequences ending in numbers greater than 1, we must first find the parent of all the numbers in the sequence. To find the parent of a given number, start at its position and read from right to left. The first number you encounter that is smaller than the number you started at is its parent. [NOTE: Since Y sequence expressions never contain 0, 1's will never have a parent.]

As an example, let's find the parent of the 3 circled in red below: 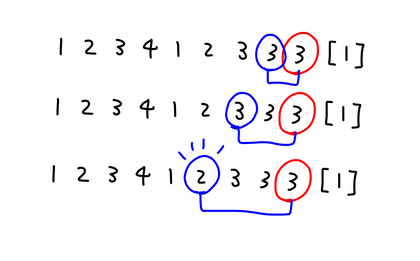 In this example, the parent of the 3 is the circled 2.

To help illustrate the rules later on, it will be helpful to draw hydra diagrams.

For each number in the sequence, we find its parent, and connect the two with a line. For the purpose of readability, it usually helps to place the children (the numbers having it as a parent) of a given number one level higher than the number itself. Since 1's have no parent, we connect them to a "root" (think of it like an imaginary "0" element). For the sequence we looked at in the previous section, the corresponding hydra diagram looks like this: 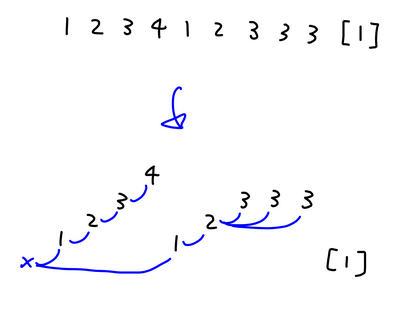 If a sequence ends in a number greater than 1, the last element will have a parent. Check the difference between the two - if it is 1, we can expand the sequence in the following way:

First, delete the last number - we call this element the cut child.

Then, find the parent of the cut child, and highlight it. (We use anger marks for this, since it is a reasonable response to having one's children cut.)

Read off the argument [n], and copy the bad part that many times.

The expansion method so far is essentially the same as Primitive Sequence System. When the difference from the parent is 2 or higher, there is another rule, which will be explained in the next section.

For expansions where the difference between the cut child and its parent is greater than 1, there are some additional steps that need to be followed. For example, let's consider the expansion of (1,2,4)[2]. 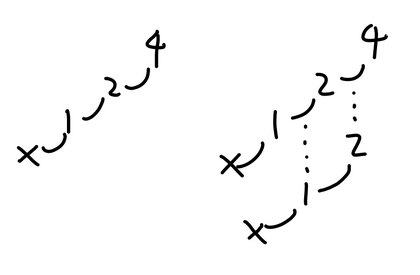 Since the second level has a difference of 1, we can expand it using the same rules as before: 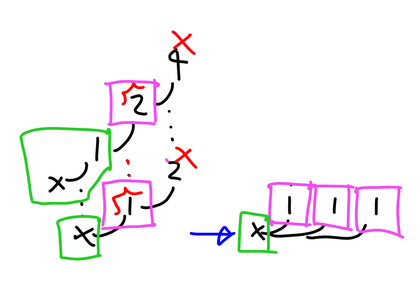 As you can see, the bad root from the second level propagates upward: a given number and all differences between it and its parents behave as a single unit - when one is modified, copied, or deleted, the rest change accordingly.

After the second level is expanded, the first level must be reconstructed. In the first level, the bad root is the 2 and the bad part is determined as before: clearly, it only contains the 2.

Copying the 1st level sequence requires a slightly more special method than the 2nd level. First, we need to analyze the "branch connection" of the bad part of the first Y sequence (1,2,4). 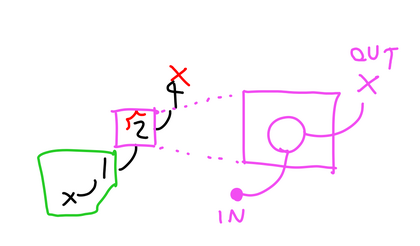 After the structure is calculated, connect the second level to the corresponding branches of the first level, and use the differences to fill in the blanks using simple addition. 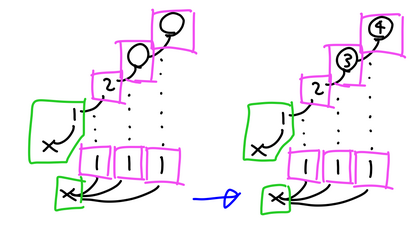 As explained in the previous section, 1's have no parent: we must add another root node for the second-level 1 to connect to. (Alternatively, you could connect it to the original root - it makes no difference.)

Now consider how the 1st level will be copied. 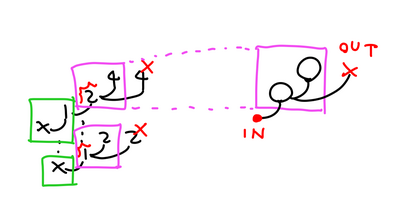 The IN is one below the bad root, the cut child is 4, and the parent is 2, so the OUT is one above the bad root. As before, we copy the bad part, connecting INs to OUTs.

This rule is sufficient to describe everything below \(\epsilon_{\w+1}\).

The differential Y sequence is (1,2,1,2), and blindly applying the parenthood rules gives us something like the diagram below: 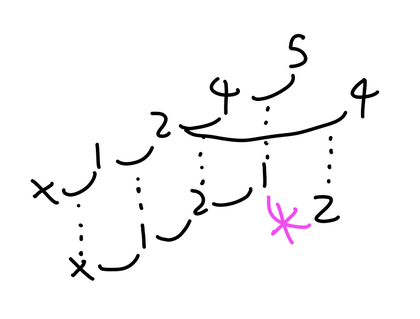 However, when finding parents in levels above the first, parents in lower levels must be respected. When you start looking left from the 2, look to the 4 in the level above and skip directly to its parent. Then, you can look back to the second level and see if you've arrived at a smaller number. Otherwise, just back to the first level and repeat until you find a smaller number in the second level. 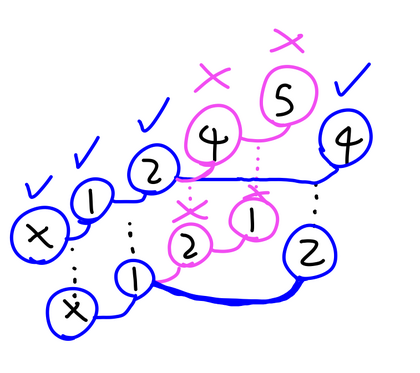 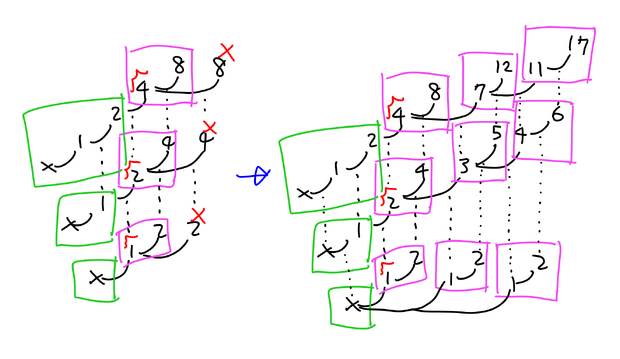 In this case, we have a parent-child difference of 4, so we first construct the second-level sequence as before. However, this sequence has a difference of 2, so we must also construct a third-level sequence from the second level. When we find parents in the third level, we now have to respect the second-level parents in addition to the first-level ones: generally speaking, to find a parent in the n'th level, look at its corresponding element in the (n-1)'th level, skip to its parent, then jump back to the n'th level and check if you've encountered something smaller.

(1,2,4,8,9,8) requires some extra consideration, so we'll have to discuss it in this section before proceeding further.

Drawing the hydra diagram for this sequence is fairly straightforward - it should look like the left side of the picture below:

To expand it, however, we need to modify the rules a little. Let's paint the nodes in the bad parts in two colors: numbers that are descended from the bad root (i.e. connected to it through some number of upward branches) will be colored pink and the rest will be colored green.

In the second level, the bad root 2 and its child 4 are colored pink, but the 1 is green because it skips the 2 and connects directly to the root. In the preceding sections, the entire bad part would have been painted pink: the green 1 in the second level is the first.

When we expand this sequence, the pink sections of the bad part are connected IN-to-OUT as before, but the green nodes remain connected to their original parent (the root, in this case): the second level becomes 2,4,1,3,5,1,4,6,1. [NOTE: Even though the last level is colored like the rest, its parent-child difference is still 1: its bad part is simply copied, not chained.]

This article is a stub. You can help Googology Wiki by expanding it.

Retrieved from "https://googology.wikia.org/wiki/Introduction_to_Y_sequence?oldid=316783"
Community content is available under CC-BY-SA unless otherwise noted.