"Boilsol" redirects here. It is not to be confused with booilsol.

Approximations in other notations 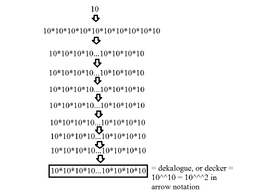 Numbers named with the fuga- family of prefixes